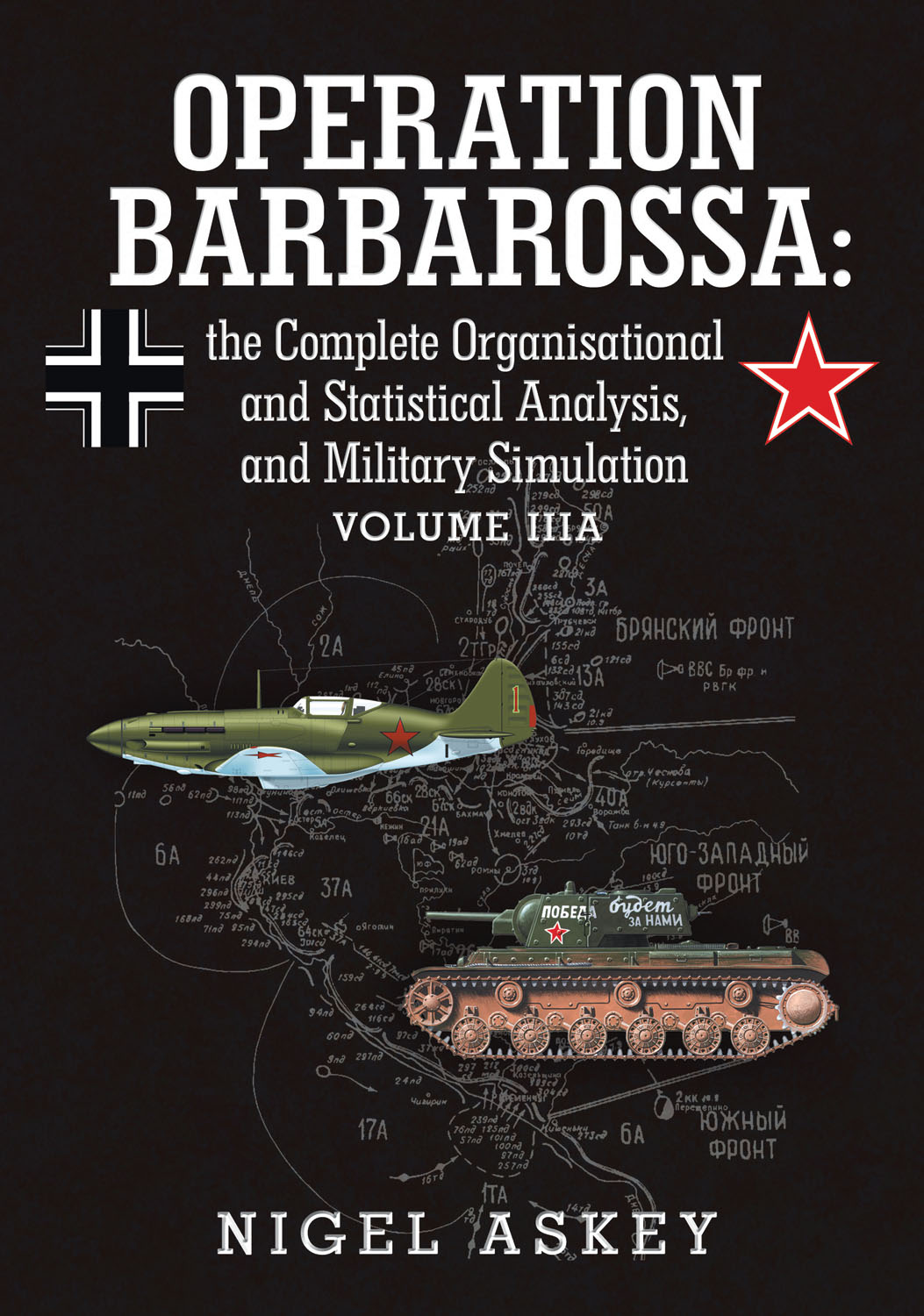 Volume IIIA is the first of two volumes relating to the Soviet armed forces, mobilisation and war-economy from June to December 1941. All the significant Soviet weapon systems and combat squads used in the campaign are analysed using the quantitative methodology detailed in Volume I, along with the contextual history. An assessment of each weapon system’s inherent ‘combat power’ is provided, as well as attributes such as the relative anti-tank, anti-personnel and anti-aircraft values.

Volume IIIA then focuses on the detailed Shtaty (TOEs) for all the Soviet land unit types fielded across the USSR during 1941. All significant units in the RKKA (Red Army), VVS, VMF, PVO and NKVD are included; ranging from the largest mechanised corps and tank divisions, down to small mortar battalions, PVO anti-aircraft battalions and NKVD security companies. In all cases the data is presented in detailed tables, using the weapon systems and combat squads previously analysed.

Volume IIIA also includes the most detailed Orders of Battle ever published on the Red Army, PVO and NKVD forces on 22nd June 1941. Even small and obscure units are included down to battalion and company level. Lastly, Volume IIIA examines in detail every unit’s actual personnel and equipment in each of the USSR’s Western Military Districts when the Axis forces invaded.

The Soviet Armed Forces, Mobilisation and War Economy from June to December 1941

1. Overview of the Structure and Terms Used in the Soviet Fully Integrated Land and Air Resource Model (FILARM)

a. Machine Guns
b. Small Arms

a. Light and Medium Armoured Cars

c. The Dearth of Soviet Wheeled and Semi-Tracked AFVs, and its Effect on the Success of ‘Deep Battle’

a. Horse Teams
b. Trucks

3. The Tables of Organisation and Equipment (TOE) for Soviet Land Combat Units from 22nd June to 31st December 1941

a. Railroad Artillery
b. Armoured Trains

12) Review of the Authorised Sizes of Soviet Divisions and Brigades, from 22nd June to 31st December 1941

5. The Transfer Schedule of Soviet Land Combat Units, which were a Deployed (D) State, to the USSR’s Western Fronts from 23rd June to 31st December 1941

6. The Actual Strength of all Soviet Land Combat Units in a Deployed (D) State on 22nd June 1941

a. The Rifle Divisions
b. The Mechanised Corps
c. The AT Brigades
d. The Fortified Sectors
e. The PVO Ground Forces

6) The Odessa Military District (Including the 9th Separate Army)