Volume VI – The Science of War Gaming and Operation Barbarossa. 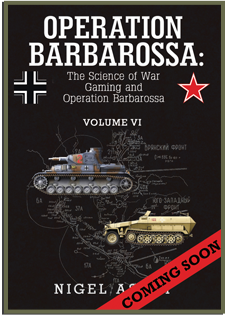 Volume VI is concerned with the science (and mathematics) of war gaming, with a particular emphasis on the WWII period. It will utilise as much of the historical data presented in Volumes I to V as possible (within the limits of available software and computer technology) and will include a complete operational – strategic level simulation of the East Front from 22nd June to 31st December 1941. Also reviewed are the many factors that assist in making an operational-strategic level military-simulation historically accurate. Conversely, the many pitfalls and mistakes that simulation designers commonly make are also examined. These 'factors' are not always apparent, but their effect on the simulation's ability to realistically simulate military operations can be dramatic.

Volume VI is currently a work in progress. It currently includes the following partially completed components.

1. The Space and Time Question in Military Simulations

1) Topographical Map of the Western USSR: 2.5km per hex (under construction, refer Blog page for more information on this)
2) The Simulation’s Resource Database (under construction)
2) The Land Combat Model, and Land Movement, Equations and Mechanics

1) The Battle of Smolensk and the Diversion of Army Group Centre away from the Moscow-Smolensk
Axis in August 1941
2) The southern Flank of Army Group Centre, and the offensives by Army Group South, in August-October 1941
3) Soviet Mobilisation from June to December 1941, particularly in the Moscow-Gorki Space
4) The Soviet Rail Network in the Western USSR
5) Logistics and Supply Distribution Efficiency (SDE) of the Belligerent Forces