‘Soldiers of Barbarossa’, a new book by Craig Luther and David Stahel

A new book by Craig Luther and David Stahel, titled ‘Soldiers of Barbarossa: Combat, Genocide and Everyday Experiences on the Eastern Front, June-December 1941’  is soon to be released, and will be very interesting. It is essentially a collection of letters/diary entries from ca. 250 German soldiers covering the first six months of Operation Barbarossa. Most of the letters (which are meticulously annotated) have never before been published. In fact this anthology is quite unique, as it is the first collection of such letters from the start of the Russian campaign to be published in the English-speaking world (and perhaps anywhere else). Chapters are simply organized month by month-June through December 1941-and each chapter begins with a ca. 2.5 page introduction prepared by the authors to orient the reader. The book will also include some colour maps and 72 terrific photographs. Although publication has been delayed a little, Craig has advised that it may be released as early as October 2020. 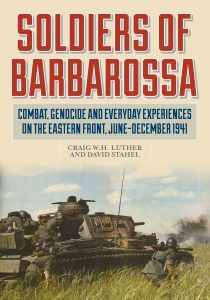